Today, in the software development industry, the issue of gender, racial, and other diversities is widely accepted. But I also think this is still largely understood as “social value,” as opposed to “business value.” As a result, the awareness is not leading to enough actions, because it loses out in the crucial fight over priority . Like all other good things, it never get acted on.

This is a story of my personal experience that helped me develop new perspectives on this issue, to more clearly see why it’s in your business interest to tackle this. 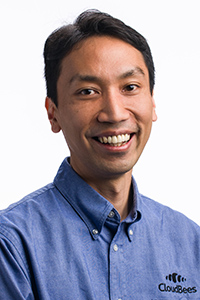 I’m a left-leaning man born to Japanese parents, who spent equal time between the U.S. and Japan. In other words, I’m generally on the side of increasing diversity in any given team. I’m also a father to a daughter. So I’ve always felt very sympathetic to the gender diversity issue. it was obviously a good value to uphold.

I was also very proud of the geographical and cultural diversity of the Jenkins community and CloudBees. I remember in one dinner we had, I looked around the table and realized that this group of eight people represented six countries and six native languages, and I loved it.

I’ve been feeling like I was a supporter of the cause, a part of the solution.

What made me pause

Then I hired Tracy Miranda as a new community manager to my team at CloudBees. She was going to help us grow the Jenkins community. She was very passionate about the issue of diversity, she led that effort in the Eclipse foundation. So it was no surprise that in one of the planning meetings, she proposed that our team prioritize tackling the gender diversity problem.

I didn’t feel like she gave me that rationale, I couldn’t answer this myself, and I felt other people in the team had the same question.

What I run into

That realization wasn’t a pleasant one to face, but it also gave me an important question — what is the business value of the diversity? Fortunately, within a relatively short period of time, I randomly came across two great stories that helped me explore this question.

From these stories, I started to see the issue of diversity differently.

It’s like opening a new bar and in a new town. You build a bar that you like, you hang the “open” sign, and you wait for people to show up. Some people wander in, the place gets busier, your regulars give you feedback, and you improve your bar, which brings more customers. Things are going great.

But at some point, this kind of growth will plateau, because you are self-selecting your customer base. At some point, to ignite the next growth, you need to do something else.

What you do is to go out on the street, see people who are not coming to your bar today, then think about what it takes to make them your customers. You might notice that there are a lot of Hispanic people walking around in your neighborhood. Maybe you’ll prepare a menu in Spanish, or put pictures in the menu. And you repeat this cycle to win more customers.

If you think about it this way, it’s obvious . Don’t sit and wait. Reach out . In marketing, for example, people do this all the time. But among software companies or open-source projects, too many people are still in the “open a bar and hope people show up” mode, and not realizing the lost business opportunities.

And that’s because this is also hard. It’s hard to think about and understand people who are different, who you don’t see.

How I connected dots

And on the point of how hard it is to think about and understand people you don’t see, I have a lot of personal experience.

I grew up in Japan, so I’m well connected in the software development scene over there. I know countless faces of great software engineers, team leaders, and open-source people over there. It’s the number 3 economy in the world, after all! But here in the west, they are just not on the radar. The open-source people I interact in the U.S. and Europe simply don’t know that these people exist, and so they don’t know what they are missing. That’s something I felt personally passionate about, and I realized the structure of this is exactly the same with the gender diversity.

I had another “aha” moment of this exact same structure from another angle, when I visited China and saw its thriving tech scene. I realized many obstacles we unknowingly set up in the Jenkins community. Our mailing lists are on Google Groups. Too bad, Chinese firewall blocks them. Our official Twitter feed was similarly blocked. If we hope to reach Chinese users, we need to be on their social network that none of us knew. Something that I was completely unaware of, that became totally obvious once I met them and talked to them.

As the software engineering community, we need more good engineers to join our teams, our communities. And a rational way to do so is to build a new muscle to seek out untapped engineers and win them. Find, talk, and understand a group of people different from you. Accommodate and win them. As with everything else, if you’ve never done it before, doing it for the first time is hard. But you will get a hang of it pretty quickly.

I think any group of people would do. When you solve it for one group, you are already halfway there solving it for other groups.

Gender just happens to be a relatively “obvious” one to tackle first. It just acts as a concrete goal of the otherwise abstract idea of “reaching out.” One, the total addressable market (TAM) is pretty big — it’ll basically double your current TAM. There’s no firewall, no time zone difference, no language barrier. It’s also a very visible group that everyone can see , which makes reaching out much easier. On top of that, it’s a well trodden path with a lot of collective experience to tap from.

So that’s where I stand in 2019. Hopefully my journey is useful to others going through the same journey. Looking forward to hearing from people who have thought more about this.

Profiles of Women in DevOps