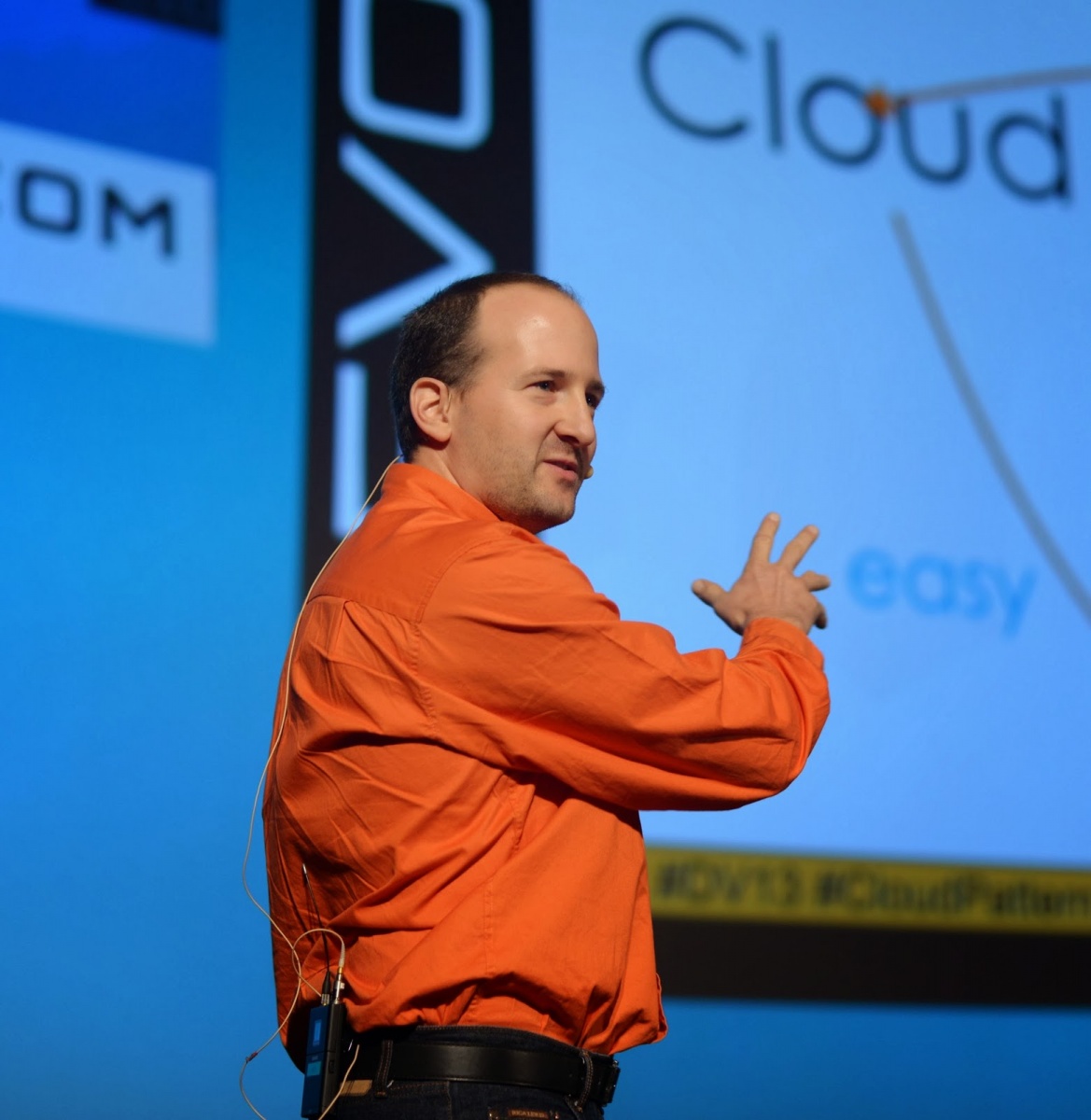 Here at CloudBees, we have a lot of really talented developers. You may or may not have interacted with them, but they work hard behind the scenes to keep the CloudBees Platform as a Service (PaaS) up-to-date with all the latest and greatest technologies, gizmos and overall stuff that makes it easy for you to develop amazing software.

<< This is the Nicolas many developers know from the French Java community - here he is presenting at Devoxx 2013.

For our last Meet the Bees blog, we buzzed down to Austin, Texas, to meet Ryan Campbell. This week, we head to Europe to catch up with Nicolas De Loof in Rennes, France. Many CloudBees customers know Nicolas from his interactions with them, when they open a support ticket.

Nicolas has been a Java architect for 14 years, working for French IT services companies. Techno-addict and open source developer, he joined the Apache Maven team in 2007, where he focused on the Google Web Toolkit plugin. Having many contacts in the French Java community, in 2008 he launched a Java User Group in Rennes: the BreizhJUG . He has also spoken at many conferencesabout Maven and Software Factory, and actively supports the Java community. Finally, Nicolas just authored a book published by Packt Publishing about Cloud Development and Deployment with CloudBees. He previously co-authored a book about Apache Maven with Arnaud Héritier.

What is your role at CloudBees? 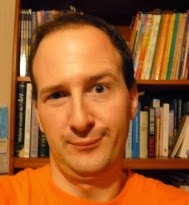 I've been an open source contributor for years as a distraction from my past boring daily work for consultancy companies. I've mostly been involved in Apache Maven: I created the GWT plugin and contributed to the first implementation of Archiva repository manager. I've been elected as a committer but never made significant commits, as most technical changes I suggested were rejected. :'(

<< Here is the Nicolas we know at CloudBees!

I'm now a support engineer at CloudBees. My role is to reply to customer issues on the support portal, both for our cloud platform and Jenkins support subscriptions. I ask engineering about the issues on IRC and just paste the answer on the support ticket so it looks like I'm the clever guy here.

As CloudBees is a startup, roles aren't immutable, so I used to provide technical sales support in Europe and also do some evangelism. I was a speaker at JavaOne and Devoxx for example, getting a free conference pass and five days of fun work. I also contribute to our platform development, mostly on Jenkins and our DEV@cloud service.

In my spare time, I recently authored a book about developing and deploying in the cloud. Last but not least, I'm a Java User Group-leader for the Rennes, France JUG. I'm involved in the Java community, and as such enjoy (tele)working for CloudBees as I can organize the JUG on business-time. :P

What makes CloudBees different from other PaaS and cloud computing companies?

I may be biased as a support engineer, but my feeling is we are different because of the meaning of "service" as the last letter in our PaaS acronym. We don't just offer virtualization and an API, but full support. We have many customers asking questions on support for cloud and Jenkins usage, but also build tools, frameworks and development best practices. This sometimes is borderline consultancy work, but it makes it interesting for me and for our customers that can get a great service. Most people confuse cloud with just infrastructure automation, but it's actually about service, and our service quality is great as far as I can tell from customer feedback.

I drive my children to school in the morning, then I'm back at my home office within two minutes - getting an hour of what used to be commuting time converted into additional working hours is a great benefit of telework. I talk to our Pacific time zone team in the morning (see Mic's Meet the Bees interview ), then have a few hours to talk with colleagues in Paris or Bruxelles before the US wakes up. (As a French guy, this time used to be dedicated to complaints and gossip. That’s what we French guys do.) This is my most active period as I can focus on development without any distraction – quite the opposite experience compared to the past when I've been working in a noisy open office space. At 5:00pm I bring my kids home from school and take an extra few hours to talk with the CloudBees US team, at some point later in the evening.

About the actual work, this can change every day. Sometimes I just have to give customers some assistance by explaining platform usage, sometimes I have to do a deep dive into Jenkins code to diagnose a memory or network issue, sometimes I can get spare time to develop Jenkins plugins, experiment with platform features or contribute to the engineering effort. Sometimes I watch TV all day long, but don’t tell my boss! (Editorial comment: Based on Nicolas's output, we can all but guarantee that he isn't watching TV all day long...except possibly reruns of Saved by the Bell.More on that later.)

What’s your PaaS prediction for 2014 and beyond?

Major cloud services will suffer various attacks and outages. Some will use this as proof that the cloud is not ready for production. The same guys will suffer a server failure on Saturday and get admin to restore a one-month old backup on Monday morning, but won't announce it publicly on http://status.acme.com, like cloud services companies do (including CloudBees ). More and more users will use cloud services anyway and we will see new startups offering innovative solutions based on them. In a few years, CloudBees will acquire Oracle and make Java ACTUALLY open source.

What are some of the most common mistakes to avoid while building an app?

Over-engineering - especially in the Java ecosystem. Java always has made simple things complex. Not just Java EE, Spring also in some ways introduced complex patterns that few applications actually require. I've been a techy fashionista and created such monster applications. I'm now a big fan of the micro-service architecture we have at CloudBees. Because of my experience, I always wonder when I see customer Hello-World applications deployed on CloudBees with a dozen frameworks and hundreds of classes. My last application was a simple web UI with some backend REST services. As dependency injection mechanism for the dozen classes of this app I've used "new" keyword. For sure I can't dynamically reconfigure the application structure, but I never actually had to do this.

What is your best memory from working at CloudBees?

The first meeting I had was on a weekend in Dublin, when I just started to work at CloudBees. As guys here have various English accents - from Kohsuke's Japanese style to Stephen's Irish one - every time we switched speakers I had to adjust my brain English-parser and would completely miss the first sentence. Hopefully I have improved my English a bit since that time, so now I can get a few words and let them think I understand the conversation.

"Galette-saucisse ," what else? Googler Ludovic Champenois used to live in Brittany like me. In California, where he's living now, he hardly can get good quality buckwheat flour. So at the last Devoxx, when we met, I offered him three kilos of local, organic, high-quality flour. I'm not sure how he was able to get through border police with three kilos of "powder" in his luggage, but this gives you an idea of what we are ready to do for a good galette.

What is your favorite TV or movie character – and why?

Zack, from "Saved by the Bell" - yes, I'm 40 now - but this was my favorite TV show as a teenager and helped me a lot to keep cool when I graduated. I liked the style of this show, the way the character is part of the story but is also able to make a direct connection with the viewing audience. I've been inspired by such offbeat humour and use it today - a lot - for my own talks when I'm invited as a speaker.

For a sample of my offbeat humour - if you haven't already had enough from my previous comments in this blog - the picture below was taken during Devoxx, as the official "Born to be a Geek" theme was inspiring to me.

The most frequent question people ask is, "Who is behind the camera?" I will save that answer for a future blog post. :P