For JUC NY, the super Jenkins admin award has to go to Jesse and David from AtTask . There are a number of awesome things they've done. First, they completely took the Jenkins instance to the cloud and not only do they provision build slaves from EC2, but also provision the entire Selenium Grid and its remote agents as well. Then they implemented a custom view plugin so that developers can see which stage in the pipeline their changes are at. They've also integrated Jenkins to their own product, AtTask, and automatically turn test failures into tickets (and it's smart enough to reopen the old ones when a regression occurs!). 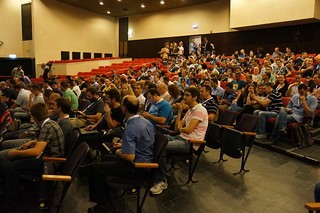 One thing I felt as I was listening to these incredible user story talks is that it'd be nice if we had the means to capture the configuration of those instances and share them with others. Kind of like how you share cooking recipes. I'm not exactly sure how to achieve it, but it should include a list of plugins, some configurations and it'd let you import those into your instance, so that you can replicate it, play with it and modify it easily.

And last but not least, the talk from Noah about Jenkins REST API was also very good, in that it really highlighted a part of Jenkins that's not widely used, and it gives everyone something that they can take back to their home.

I hope this post encourages you to come to a future JUC. Please submit papers and register from the website . I'm really looking forward to the next one in Israel (July 5), and the one after that, Tokyo (July 29), has already signed up 700 people , so it'll be a crazy event! If you can't make those, there's always San Francisco (September 30) and Antwerp (November 13).

Hope to see you at one of the 2012 JUC Conferences!