On Wednesday, Andrew Phillips of XebiaLabs and I hosted a very successful webinar (Jumping from Continuous Integration to Continuous Deployment with Jenkins Enterprise and Deployit ): Andrew is VP of Product Management at XebiaLabs and on the webinar he did a great demo of how to use the Jenkins Deployit Plugin to manage complex, multi-platform deployments. You can see the recording here , but he kindly provided this detailed write-up on the demo flow - many thanks, Andrew!

After demonstrating the Jenkins Enterprise CI setup, we discussed key preparation steps for expanding to continuous delivery (see the following blog post for more details on this topic):

We also introduced a set of questions that can serve as a useful "self-assessment" to give you insight into the progress of your preparations:

We then proceeded to demonstrate a continuous deployment setup along these lines for two variants of the chess application:

For the actual deployment of the application we used Deployit , XebiaLabs' enterprise application release automation product. In Deployit, we defined the two target environments, containing the appserver and databases as well as a remote test host for post-deployment smoke tests.

We also defined environment-specific values for the application in Deployit. This allows us to customize our environment-independent deployment package that we will build in Jenkins and keep sensitive information such as credentials out of our build jobs:

We have also defined release pipelines for our two applications to track them from Dev all the way through to Production:

With our deployment targets set up, we can package our application in our build jobs and trigger deployments from Jenkins. Deployit integrates with Jenkins via the imaginatively-named 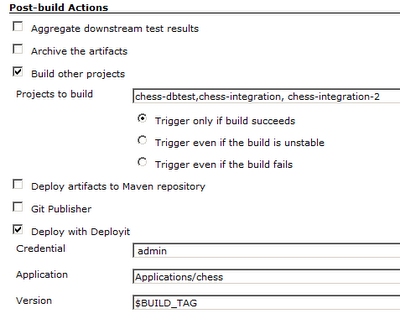 First, we configured the plugin to assemble various artifacts in the job's workspace into a deployment package:

Next to build artifacts such as the WAR file and SQL scripts we can also include configuration resources such the datasource definition and post-deployment smoke test. We used placeholders for the datasource URL, username and password to ensure the deployment package is environment independent (these placeholders are automatically resolved against the environment configuration specified securely in Deployit):

We also configured the Jenkins Deployit plugin to publish the package to Deployit (alternatively you could archive it and later import selected packages into Deployit as needed) and trigger a deployment to our Dev environment:

We can also use Deployit to easily make arbitrary commands, such as the integration test scripts, independent of the target environment and run them agentlessly (useful for externally provided virtual machines where you cannot easily install a Jenkins agent, for instance).

This again allows us to decouple our pipeline jobs from the target environment, increasing security and reducing the maintenance required to keep our jobs in sync with our environments:

Running both jobs results in integration-tested versions of our applications in their Dev environments:

From here, we can easily promote these versions to subsequent environments (we can also trigger such promotions from Jenkins, obviously):

As we get closer to Production, deployments are commonly restricted by release conditions that first need to be met. Deployit allows you to specify and track the status of these "release gates" - deployments to QA and Production are blocked in the above example since some of the defined conditions are not satisfied.

Andrew is VP of Products for XebiaLabs, providers of the industry-leading release automation solution, Deployit. Andrew is a cloud, service delivery and automation expert and has been part of the shift to more automated application delivery platforms. Sitting on panels and driving blog and social media conversations, Andrew regularly contributes to key trend-defining technology discussions.