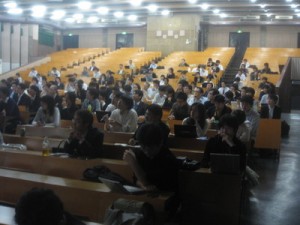 We held our first user meetup in Tokyo last week, by taking advantages of my visit to Tokyo .

This meetup was the biggest ever, and Hudson users showed up in full force — I was told there were more than 200 people attended, some from pretty far away places. The program featured 4 sessions of 20 minutes each and 6 lightening talks of 5 minutes each. In addition to the speakers, there were volunteers doing the backstage work.

The first talk by cactusman focused on an introductory demo for those who are new to Hudson. I followed with the "state of union" talk of Hudson as well as roadmaps. I've also announced the founding of Japan Hudson User Group, as an organization for planning future meetup events. The next talk was from Shisaku Nishino and was a case study of the Hudson deployment at his company. Among other techniques, he has organized his integration tests into a tree structure (where each test starts at the end of the parent test), which enables him to re-execute a failed test very quickly. The final session was from Kirika who presented his Hudson deployment for Ruby on rails project.

The topics of the lightening talks were even more diverse; ranging from the Redmine/Hudson integration , Nabaztag , to the introduction to the localization effort . Of particular fun was a talk by Kiyotaka , who is known for his GCrawler work that scans Google Code for Grails projects for automatic CI setup. A liberal translation of his talk is "how to be a chick magnet with Hudson", where he talked about a number of funny (some actually useful) techniques and tips. Other talks were more serious and insightful. One proposed an approach to unit testing that avoids constant maintenance overhead, and another encouraged more community participation even for those who don't code.

The entire meetup was broadcasted via UStream .