When we started integrating the deployer for Cloud Foundry I had a vision that we'd eventually end up with a mess of “Deploy application to XYZ” build steps replicating code all the way along.

These are just some of the complexities that you have to learn when implementing a proper application deployment framework within Jenkins. It does not make sense to re-invent the wheel every time you want to write an application deployer. With the new framework in the CloudBees Deployer Plugin a deploy engine provider need only concern itself with three things:

From the descriptors of these three classes the framework is able to:

So the take-home from all of the above is that we did a lot of work to make writing deploy engines easier. Our intention is to push the core of our framework back to OSS, but there is still some untangling to do before we can do that and our priority is ensuring that we don't break things for our customers. In other words if we rushed the untangling we would break existing users of the CloudBees Deployer Plugin, and we don't want to do that.

So what are the changes that a user will see?

Well the first most obvious change is the Deploy Now icon. It used to be

The second change is that all your “Deploy to Cloud

Bees” build steps will be automatically converted to “Deploy applications” build steps with a “CloudBees RUN@cloud” hosting service. This is part of our commitment to not breaking things for our existing users. Other than that there should be no change in functionality.

Our DEV@cloud users though can start turning on the enhanced functionality. If they visit our Google App Engine console  or our Cloud Foundry console  they can enable their DEV@cloud instance for deploying to these other hosting services, and if your app will run on all three services, well you can deploy to all three:

I think that is pretty nifty. Here's what the deployment configuration for the above build job looks like: 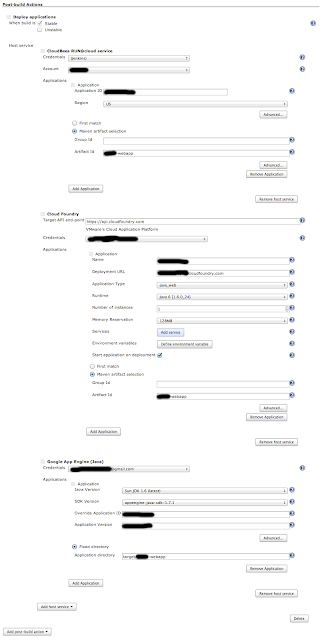 The “Deploy Now” functionality, from my point of view, is ideal for developers in two situations:

Anyway, this post has turned into something a bit longer than I intended when I started writing it, but hopefully you found it worth the read!

Stephen Connolly  has over 20 years experience in software development. He is involved in a number of open source projects, including Jenkins . Stephen was one of the first non-Sun committers to the Jenkins project and developed the weather icons. Stephen lives in Dublin, Ireland - where the weather icons are particularly useful. Follow Stephen on Twitter  and on his blog .